While snakes will generally avoid you or your pets, curiosity from your dog or cat might get the better of them and they could get bitten. Snakes are less active during cooler months and become more active in the warmer months (November-March), therefore more care should be taken during these times.

How to reduce the risk of snake bites

Snakes will often be attracted to sources of food, water and shelter; minimising these attractions in your back yard will reduce the risk of your pet encountering a snake. Keeping grass cut short and property free of gathered objects will remove places for snakes to hide amongst. It is strongly recommended cats are kept indoors, however, building a snake-proof enclosure would allow time outside while being protected from snakes. When walking your pets, keep them close, staying on clear paths and away from high grass and rocks.

Snakes are commonly seen near sources of fresh water, such as, rivers, creeks or dams. The most common snakes in South Australia are brown, tiger, black, red-bellied black and copperhead. If you see a snake do not go near it, if you think your pet has been bitten do not try to catch it. 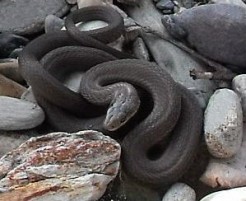 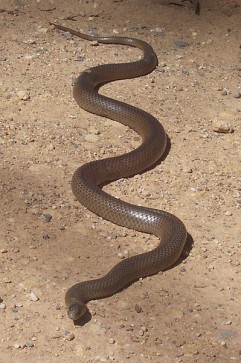 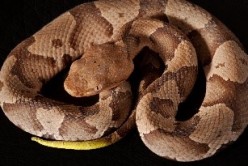 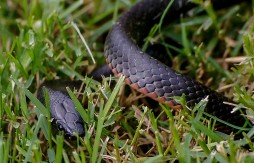 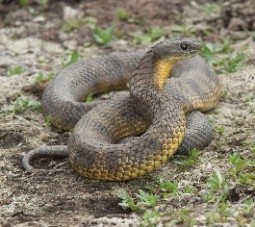 If Your Pet Gets Bitten By A Snake

If you suspect your pet has been bitten by a snake, try and remain calm. Do not try to collect the snake. If the snake has bitten your pet on the neck, remove any collars. Try and keep your pet as calm and still as possible to reduce venom moving from the bite site. Also keep the bite site below the level of the heart. DO NOT place ice packs or try cleaning the wound or suck out the venom, these attempts will not help your pet. Finally, if you think your pet has been bitten by a snake contact your vet immediately.

Symptoms That Might Occur If Your Pet Is Bitten

Symptoms of a snake bite can occur from 1 hour up to 24hours from the time of the snake bite. This is dependent on the type of snake as not all snake venom has the same effects as others. Often an animal will initially collapse or vomit and seem to recover before getting worse. Early signs include pupils enlarging and weakness in the hind legs, eventually leading to paralysis. Breathing can become rapid and shallow creating difficulty in getting sufficient oxygen supply ending in a coma and eventually death if not treated. Other symptoms to look out for include; depression, trembling, drooling, bleeding from wounds, blood in urine or vomit and pale gums. It is extremely important you get your pet to a vet immediately if any of these symptoms occur.

How a Snake Bite Will Be Treated

Depending on the severity of the symptoms upon presentation a snake venom detection kit can be used to determine the type of snake that has bitten your pet. Once the snake venom is identified anti-venom can be administrated along with other intense supportive care, such as intravenous fluids and pain relief. Sometimes multiple anti-venom doses might need to be administered if the animal has severe symptoms. In more severe cases your pet may need to be placed on a ventilator if paralysis and breathing difficulties occur. Generally, your pet will need to be hospitalised to have 24hr support care until the vet thinks they have recovered enough to be off of supportive care.

Prognosis is largely dependent on the speed of treatment being started. Therefore if you think your pet has been bitten getting to a vet immediately will give a much better prognosis. Recovery can take 1-2 days if treatment was administrated immediately and if symptoms were minimal. With more severe cases recovery can take up to 2-3 weeks.